Nashua Public Library users have voted for mayor in the library's penny poll, and Jim Donchess is the winner. [caption id="attachment_2377" align="alignright" width="146"] Jim Donchess[/caption] For the past six weeks you've been tossing loose... Read More

The Last Debate: A Mayoral Forum

The Nashua Public Library and WSMN 1590 will present “The Last Debate: A Mayoral Forum” on Wednesday, October 28, from 7 p.m. to 8:30 p.m. The event, which is free and open to the public, will be held in the library’s Music/Art/Media Wing. 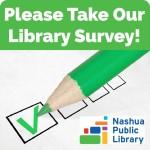 As part of its long-range planning, the Nashua Public Library is conducting a survey. Whether you use the library or not, staff wants your input. You can complete the eight-question survey at www.tinyurl.com/nplsurvey2015 or pick up a printed copy... Read More 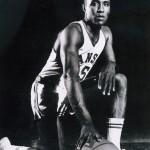 Boston Celtic legend JoJo White, recently inducted into the Basketball Hall of Fame, and his biographer, Mark C. Bondanza, will visit the Nashua Public Library on Thursday, October 15, at 7 p.m. The two will talk about Bodanza’s book, Make It... Read More

Vote for mayor in our penny poll

Bring your loose change to the Nashua Public Library and enter our penny poll. Toss your coins into the jar for your candidate for mayor of Nashua, Chris Williams or Jim Donchess. The results will be tallied before Election Day (Tuesday, November... Read More

"Journeys of an Artist," an exhibit of multimedia artwork by Cecilia Ulibarri, is on display in the library Art Gallery in May and June. Cecilia's...