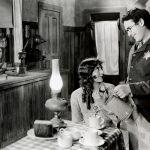 NASHUA, N.H.— He was the most popular film star of the 1920s, routinely outpacing comic rivals Charlie Chaplin and Buster Keaton at the box office.

He was Harold Lloyd, the boy next door who could wind up hanging from the hands of a clock high atop a skyscraper. Audiences loved Lloyd’s mix of visual comedy and thrilling adventures, making him one of the most recognized icons of early Hollywood.

See for yourself when ‘The Kid Brother’ (1927), a feature-length film regarded as Lloyd’s masterpiece, is screened on Sunday, Jan. 8 at 1:30 p.m. at the Nashua Public Library, 2 Court St., Nashua.

The screening will feature a live musical score for the movie by New Hampshire-based silent film accompanist Jeff Rapsis. The family-friendly screening is free and open to all.

The program is an opportunity for local audiences to experience early cinema as it was intended: on the big screen, with live music, and with an audience.

In ‘The Kid Brother,’ meek country boy Harold Hickory (Lloyd) looks up to his tough father, but is overshadowed by two burly older brothers. When a traveling circus brings trouble to town and possible disgrace to the Hickory clan, can Harold save the family name?

From that simple situation, Lloyd weaves an exciting tale that critics and film historians say show him at the height of his powers as a filmmaker and comedian.

Accompanying the film will be Jeff Rapsis, a Nashua native. Rapsis first learned about vintage cinema through books and films at the Nashua Library in the 1970s while a student at Spring Street Junior High School.

“It was before home video,” Rapsis recalled. “At the time, the Nashua Public Library had a huge collection of movie books and actual films you could borrow. I went through it all, and it’s helped spark my interest.”

Today, Rapsis performs regularly at silent film screenings throughout the nation. In January, he’ll appear at Cinema Detroit and Case Western University in Cleveland, Ohio. In February, he’s a featured accompanist at the Kansas Silent Film Festival at Washburn University in Topeka, Kansas.

“It’s a great honor for me to accompany a silent film program at the Nashua Library, a place that first kindled my interest in classic movies,” said Rapsis, who today lives in Bedford, N.H.

In the eyes of many critics, Lloyd’s ‘The Kid Brother’ has emerged as the comedian’s masterpiece—a timeless work of silent film story-telling that transcends its era.

“The first silent film I ever saw that made me actually stand up and cheer,” wrote critic Steven D. Greydanus of The Decent Films Guide. “As a first introduction to silent film, I would pick ‘The Kid Brother’ over the best of Chaplin or Keaton every time.”

“Unlike Chaplin’s Little Tramp, who was as much defined by his bizarre eccentricities as his bowler and cane, Lloyd’s character, with his trademark spectacles, was an instantly likable, sympathetic boy-next-door type, a figure as winsome and approachable as Jimmy Stewart or Tom Hanks,” Greydanus wrote.

Harold Lloyd, along with Chaplin and Keaton, stands as one of the three masters of silent comedy. Though Lloyd’s reputation later faded due to unavailability of his movies, the recent re-release of most of his major films on home media has spurred a reawakening of interest in his work and a renewed interest in theatrical screenings.

“Seeing a Harold Lloyd film in a theater with live music and an audience is one of the great experiences of the cinema of any era,” said Rapsis, the film’s accompanist.

“Films such as ‘The Kid Brother’ were designed for a specific environment. If you can put those conditions together again, you can get a sense of why people first fell in love with the movies,” Rapsis said.

NPL removes an outdated and ineffective financial barrier in its mission to provide equitable access for all.   NASHUA, NH - The Nashua Public...